“I also shall make him My firstborn, The highest of the kings of the earth.
Psalms 89:27 NASB

Therefore thus says the Lord GOD, “Behold, I am laying in Zion a stone, a tested stone, A costly cornerstone for the foundation, firmly placed. He who believes in it will not be disturbed. Isaiah 28:16

Since the beginning of time , God has laid down a redemption plan for humanity. The chief cornerstone that is Jesus Christ. He is our rock, our foundation for the salvation of our souls. God revealed this prophecy to the Jewish people , many didn’t understand Gods plan back then and many still don’t understand Gods plan today.  All our hope and victory stands on the foundation, “Chief Cornerstone” Jesus Christ.

Comparing the different translations, its says a tested stone (NASB) precious and costly (NIV) tried (KJV) firm (NLT) God is telling us we can rely and trust in Jesus. He has been battle tested and victorious over sin and death. He who believes will not be disturbed (NASB) not stricken with panic (NIV) Never be shaken (NLT) You can have the Peace of God when you stand on the “Cornerstone” , “The Rock”, the foundation of God

Jesus said to them, “Did you never read in the Scriptures, ‘THE STONE WHICH THE BUILDERS REJECTED, THIS BECAME THE CHIEF CORNER stone; THIS CAME ABOUT FROM THE LORD, AND IT IS MARVELOUS IN OUR EYES ‘? Matthew 21:42

Jesus revealed this prophecy, he is the Chief Cornerstone, he is our Rock, and our Redeemer. Have you rejected Jesus just as the others have? Or will you stand on his Word, Hope, and Victory. Don’t build your life anywhere else but The Rock, when the storms of life come in, those who built on the Cornerstone wont be shaken or disturbed in Jesus Name Amen

In that day the LORD will punish Leviathan the fleeing serpent, With His fierce and great and mighty sword, Even Leviathan the twisted serpent; And He will kill the dragon who lives in the sea. Isaiah 27:1

When will our pain and misery ever end? One message that God makes clear throughout The Bible is Satan will be defeated! This event is not only prophesied here by Isaiah, but is displayed in Revelation, Daniel, and Psalms. So why is God waiting so long to destroy Satan? Why would he allow him to cause so much destruction?

“How you have fallen from heaven, O star of the morning, son of the dawn! You have been cut down to the earth, You who have weakened the nations “But you said in your heart, ‘I will ascend to heaven; I will raise my throne above the stars of God, And I will sit on the mount of assembly In the recesses of the north. (Isaiah 14:12-13)

The first thing we need to realize is we all have the gift of “Free Will”. God is not a dictator and wont force anyone to worship him, including “Lucifier” (Satan) who was an arc angel in Heaven and decided to make himself like God. Therefor God has allowed us all to make a choice whether to worship God or Satan.

The Lord is not slow about His promise, as some count slowness, but is patient toward you, not wishing for any to perish but for all to come to repentance. 2 Peter 3:9

The next thing to remember is Jesus hasn’t returned yet because God wants us all to be saved. Since we all have “Free Will” we must be given the choice whether to accept Christ or follow Satan. Throughout generations everyone has been trying to predict the return of Christ. That day is only known by the Creator , our Heavenly Father

So who is Leviathan? Leviathan in Hebrew also meaning “Serpent” and later in Judaism referenced at a “Dragon”. Leviathan is symbolic of a great beat with massive power, this is symbolic of oppressing governments and militaries under Satans control. The message is no matter how powerful a Satanic force is here on Earth, God has the ultimate victory.

If we look at the oppressing militaries and governments that have attacked Gods people throughout history, the Egyptians, the Greeks, the Romans, they are all history. God always has the ultimate victory in Jesus Name Amen!

“Greater love has no one than this, that one lay down his life for his friends. John 15:13

What does Memorial Day mean to you? Most of us in America will have off work or school because of Memorial Day, but besides having picnics and opening the swimming pool, do you stop to think why we are celebrating this day? It’s easy to take freedom and liberty for granted, but throughout the generations there has been brave men and woman who have paid the price for all of us.

Regardless of what your political or religious beliefs are in America, you are reaping the benefits of these brave soldiers sacrifice. If it wasn’t for them I wouldn’t even be writing this blog, as I would probably be persecuted for my Christian beliefs like most countries around the world. Most of us in America take for granted our rights and freedom. Remember freedom always comes with a price.

Jesus also paid the price for us, and because of his sacrifice we are set free. Set free from sin and death. We also need to remember to reflect on what Christ has done for us and where we would be without him. Just as Jesus said there is no greater love to lay down his life, he showed that love for all of us on the cross

So this Memorial Day, reflect on the soldiers who paid the debt for your freedom, reflect on your Lord and Savior who saved your soul. Remember to Thank every soldier you see, for even if they did survive, they still paid a price for you. God bless America and all our soldiers past and present in Jesus Name Amen

He will swallow up death for all time, And the Lord GOD will wipe tears away from all faces, And He will remove the reproach of His people from all the earth; For the LORD has spoken. Isaiah 25:8

Regardless of how much money you have, what nationality you are, how good your health is, or the color of your skin, we all face the same problem. We all face the issue of death. Its not an issue we like to talk about , but it’s a reality that hits most of us hard eventually.

This is why accepting Jesus is so important to everyone, not just the lost or hopeless, but important to the entire world. God has promised to one day eliminate death and sorrow. Seems hard to believe as we see the tragedies going on every day. However, when we look in the book of Genesis, at the very beginning of Gods plan and creation, we were immortal and flawless. Through Christ we can return to this state again, and the Earth will be restored to Gods paradise. (Revelation 21)

The last enemy that will be abolished is death 1 Corinthians 15:26

Jesus defeated your greatest enemy that you, on your own, could not defeat. Jesus has defeated death, and one day we will stand with The Lord , where pain, mourning, sorrow, and sin will be no more. For the former things have passed away, but through Christ we have eternal life and victory. As Jesus said on the cross “It Is Finished”, the Lord is just waiting for your heart in Jesus Name Amen

For You, Lord, are good, and ready to forgive, And abundant in lovingkindness to all who call upon You.
Psalms 86:5 NASB

Then in that day The nations will resort to the root of Jesse, Who will stand as a signal for the peoples; And His resting place will be glorious. Isaiah 11:10

God works in mysterious ways. Most of us have experienced this for ourselves. This is the same way God revealed the Messiah, Jesus (Yeshua) , to Isaiah and the Jewish people. “The nations” meaning Jews and Gentiles, the entire world, will “resort” or “seek” to the root of Jesse “Jesus Christ”

This is why the gospels of Matthew and Luke contain the genealogy of Christ. To show the Jewish people and everyone that Jesus fulfilled the Messianic prophecies.

The record of the genealogy of Jesus the Messiah, the son of David Matthew 1:1

When He began His ministry, Jesus Himself was about thirty years of age, being, as was supposed, the son of Joseph, the son of Eli, Luke 3:23

God works in mysterious ways, and it says his “resting place” or “Kingdom” will be glorious! The day has already come, Jesus has set you free, glory to God in the highest Amen!

Woe to those who call evil good, and good evil; Who substitute darkness for light and light for darkness; Who substitute bitter for sweet and sweet for bitter! Isaiah 5:20

We live in a world today, that instead of dealing with our sins we justify them. This is obviously a big problem for your salvation. You can’t be forgiven for your sins if you don’t repent or confess them. However, if you don’t recognize what sin is, you will never repent of them. Therefore, God becomes angry with people who justify sin. This is also why you should study The Bible for yourself, to understand what sin is and why it destroys the foundation of humanity

Sin is lawlessness, (1 John 3:4) meaning anyone who continues to sin is following Satan and waging war against God. Sin didn’t come from God (James 1:7) Sin originated from Satan who wants to be God and destroy his kingdom.

The word “Woe” in the Bible means “Great sorrow” “misery” “a curse” “denunciation” When you continue to live in Sin, which is rebel against God, your living under a curse. Great sorrow and misery will follow your life. This is not a scare tactic, this is straight from the Word of God.  If you want to know why your life seems so hopeless and miserable, its probably because you have a sin problem.

The Good News is God so love you that he sent his only begotten Son to free you from the curse and bondages of sin. Jesus is the only way to become set free, call upon him today and become reborn Amen! 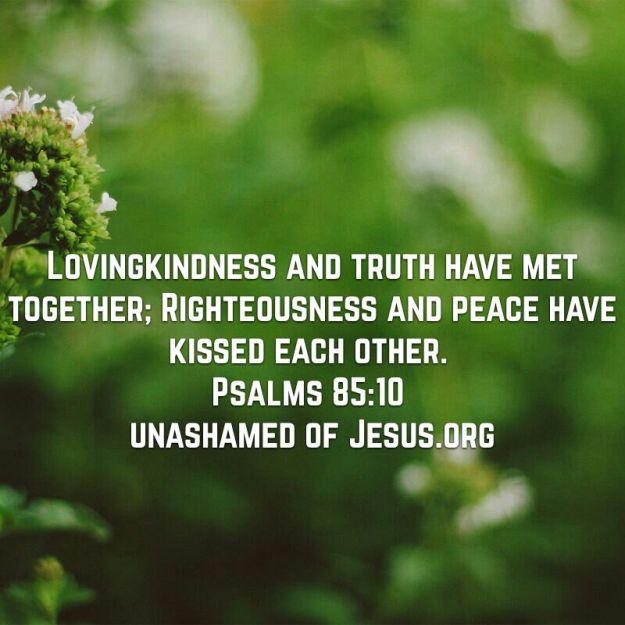 Lovingkindness and truth have met together; Righteousness and peace have kissed each other.
Psalms 85:10 NASB